Much has been made of the Thin Blue Line, a term used to describe police officers and how they protect civilian populations despite their relatively small numbers. But there are other thin lines that represent the protection provided by the relatively few who guard so many.

The idea of a thin line was created several decades ago. It is meant as a visual symbol that denotes their value while also showing their numbers relative to the overall population. As a symbol it provides both support and a reminder of just how valuable their services are to the country. There are different thin lines that represent those who serve in one form or another, but the green and white are part of the military. 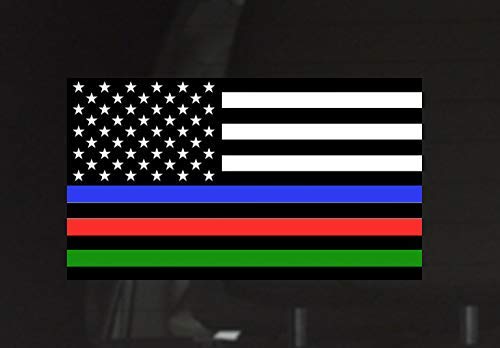 This is the line that represents Army and Military Police Members. As of 2021, there are currently 1.7 million members of the US Army who serve our country. They provide the line of protection from foreign sources. The Army provide the military strike force that helps ensure the safety of the US and stability in the parts of the world where they are located.

The 1.7 million does not include the 200,000 who serve in the US Marine Corps. While the Army is considered the bulk of the US ground forces, the Marines are the fast strike force designed to carry out missions in far away places.

The Thin White Line is the reserve force, the men and women who strive to protect the country from the homeland. Offer aid, comfort, and service to those inside the borders. Plus, they stand at the ready to serve overseas if needed.

The veterans are those who have served our country. Whether in wartime or in peace, their contributions have helped so many retain the freedoms promised by our country. It is quite common for many veterans to be the children and grandchildren of those who have also served.

Celebrating the Contributions of Our Military and Veterans

The Thin Green and White Lines are more than simple sayings, they are representative of what our military both in past and present is doing for our country today. You can purchase items that honor those who have and are serving with products that contain the Thin Green Line and Thin White Line respectively.

Such items have instant recognition, especially the flags that contain the lines as part of the stars and stripes. Recognizing military personnel who have defended our country since its inception now have an instantly recognizable symbol that supporters can purchase.

For those who are serving, have served, or who want to honor those who have put on the uniform, you can now purchase items that showcase the Thin Green Line and the Thin White Line. https://challengecoinnation.com/pages/custom-coin-pricing-bulk-coin-orders