During the age of pirates, just as it is today, flags were flown to identify ships on the sea. The flags' colors represented different countries.

The color black was associated with death in many cultures, and so the pirates began using black as the background color on their flags. To create a deep fear in their enemies and well-laden merchant ships, pirates added frightening symbolism to their flags.

These early pirate flags were known as Jolly Rogers. They were hoisted when the pirate ship was preparing to attack another ship. 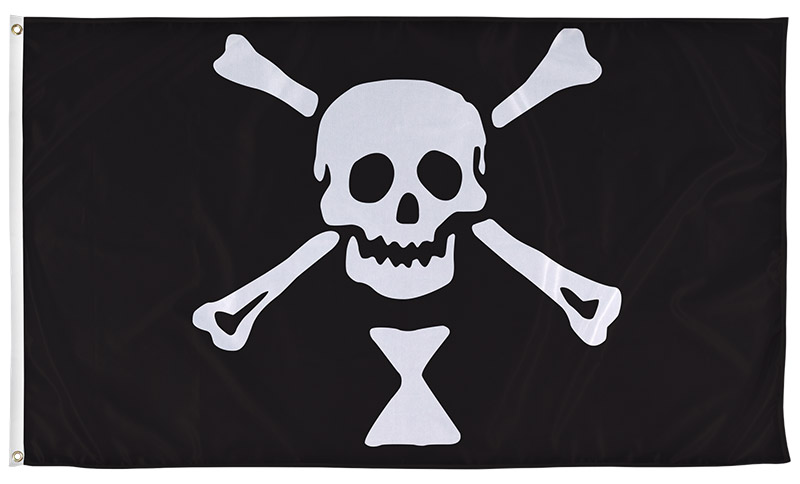 While it remains unknown what exact symbol or symbols were on Blackbeard's flag, it is generally accepted in modern lore that his flag bore the image of a horned skeleton. An hourglass, a measurement of time, is held in the skeleton's right hand. In its left hand is a spear that pierces a red heart. Three drops of red blood fall from the wounded heart.

Some sources claim that Blackbeard flew a black flag bearing a white skull which was accompanied by a blood-red flag.

Whichever flag Blackbeard (Edward Teach) flew, it was hoisted to show that he meant business.

The horned skeleton is seen as raising his hand to the devil, "toasting the Devil." The speared hand piercing the heart signifies that no quarter would be given to those who would attempt to fight against his ship's will to steal and plunder.

Many historians believe that the horned skeleton is inaccurate, stating that if the artist wanted to portray Death, he would have only used a skeleton. If he wanted to portray the Devil, a devil form would have been used instead of bones. It was unknown at that time to mix the symbols of Death and the Devil.

The infamous Blackbeard was an English pirate by the name of Edward Teach (or Thatch). He and his crew in a ship known as the Queen Anne's Revenge would attack French merchant vessels. Cargo would be stolen and resold. Captured slaves would either be taken to work onboard the ship or were abandoned on islands.

Known For His Looks

What made Blackbeard so memorable were his looks. He was a tall man with broad shoulders. He had long black hair that he often wore in pigtails tied with colored ribbons and a long, scraggly beard.

Before a battle, he would light fuses and lay them over his head, held in place by his hat. The slow-burning fuses let off smoke and gave Blackbeard a wild and frightening appearance.

The Most Famous Pirate Flag

During the 18th century, any pirate flag raised before a battle was called the Jolly Roger. In modern society, the Jolly Roger refers to the most recognized flag in pirate lore.

The white skull and crossbones on a black background were used by several pirates in the 18th century, including Edward England, Black Sam Bellamy, and John Taylor. The flag has come to symbolize rebellion and independence.

what was the biggest pirate ship called?

was the flying dutchman a real ship?

the flying dutchman is a mythological ghost ship, the spectre of a dutch trading ship from the 17th century, which is said to be doomed to sail the oceans forever. according to legend, the flying dutchman is cursed to sail the seas for eternity. the legend of the ship is based on the story of the dutch ship named the vliegende hollander, who was captained by a man named hendrik van der decken. the story goes that the ship was cursed by a witch who was in love with the captain. the curse was supposedly the result of the captain's rejection of the witch's love.

how many ghost ships are in the ocean?

Blackbeard's flag was originally a symbol of death and destruction, but it has come to represent different things to different people. Some people saw the skull and crossbones as the perfect symbol for pirates because they thought that pirates were bandits who robbed other ships and killed everyone on them. Other people claim that blackbeard's flag is a pirate's code that commanded others not to make any trouble with them if they didn't want trouble themselves.

The image of blackbeard’s flag is usually associated with pirates, skulls, death, and destruction. The skull can be found in many cultures as an icon for death or bad luck. It seems fitting for a pirate’s emblem; this was especially true when pirates were known as “the enemies of all mankind”. It also is associated with how a person may feel after dying—helpless until the end comes and the hourglass empties. Furthermore, some people used the image of the skull with two crossed bones to tell other ships not to challenge them or else face their wrath (Pirates). In addition, some believe that blackbeard wanted his crew members to follow his own code by respecting boundaries and order among them.

Check out one of our most popular coins HERE