What is the Navy's motto? They must have a motto right? Wrong! The US Navy actually does not have a motto but rather some "unofficial" mottos dating back years! Then there are the Recruiting Slogans which are official U.S. Navy Slogans. The U.S. Navy frequently changes their recruiting slogans and spares no expensive when coming up with a good slogan. They will hire marketing firms and conduct focus groups until they are satisfied with a new slogan.

First of all, let's take a look at some of the 'Unofficial" mottos and slogans that have permeated the Navy over the years:

• "Non sibi sed patriae" Translation: Not for Self but Country
• Honor, Courage, Commitment

Now let's look at the official recruiting slogans that the Navy has used throughout the years.

These are just some of the official unofficial slogans and mottos used by sailors of the Navy and these proud traditions date back to 1775. While there is no official Navy motto, there is in fact motto for the U.S. Navy Seals: "Ready to Lead, Ready to Follow, Never Quit" There are other unofficial slogans used by various divisions of the navy. For example, The U.S. Navy Divers unofficial motto is "So Others May Live" and the U.S. Navy Searh and Rescue utilized the following motto: "In Peace and War."

And just when you thought there wasn't enough motto's and slogans for the U.S. Navy, most Navy ships have their own individual slogan. These ships include: USS George Washington, USS Harry Truman, the USS George Bush, USS Ronald Reagan, USS Theodore Roosevelt, USS Abraham Lincoln, USS Carl Vinson, the USS Enterprise, the USS Nimitz and the USS Dwight Eisenhower. Some of their slogans include "Teamwork, a Tradition, "Shall not Perish," "Peace Through Strength" and "Freedom at Work" 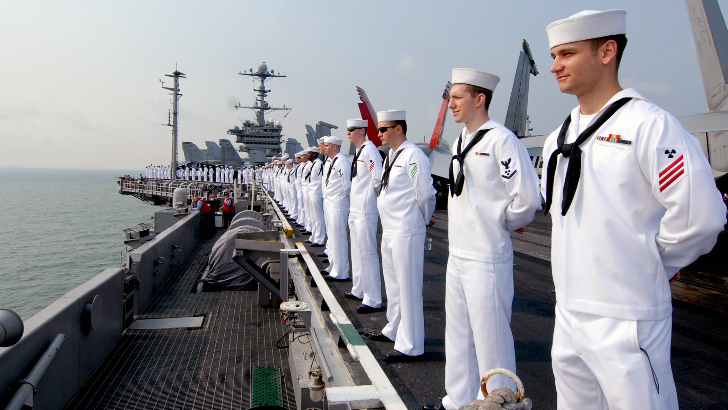 So we have covered most slogans and mottos used by the Navy. As you can see there are a multitude of slogans and mottos that have been used over the years. If you are a former member of the Navy sailor and you forget what mottos or slogans were around during you period of service, just -re-read this article or a simple google search should give you the answer. To the many men and women who have served: you have made us all proud and we thank you for your service. To those of you who haven't served, consider enlisting and be "Forged by the sea."