Anyone would be excused for not normally associating elephants with flight, pachyderms can't fly. So, it may surprise some that elephant walk has actually been a term in use by the United States Air Force for decades. An "elephant walk" for the US Air Force refers to a group of aircraft in tight taxiing formation before take-off. The term has been in use since World War II. Regularly during World War II, the allied forces would conduct bombing raids and missions with well over a thousand aircraft. At the sight of the lumbering bombers bunched together on runways, onlookers were said to remark that they resembled a large pack of elephants. Indeed, the nose to tail formation of the planes is alike to behavior exhibited by elephants around a watering hole, but there are also historical and tactical reasons for why this term entered the US Air Force lexicon.

Tactical Reasons for an Elephant Walk

Spend any amount of time looking at US Air Force photos and you are bound to run into a picture of aircraft doing an elephant walk, there is a reason for this, an elephant walk looks cool. Everyone knows they look cool, which is why the practice is adopted by some aerobatic teams, but while looking cool it also has a tactical purpose. Showing off is an opportunity to show the great capabilities of any force and the US Air Force in particular. Officially used to identify a "maximum sortie surge," the formation is often used as part of training exercises as part of preparations for the launching of squadrons in mass events. Such training has the added benefit of increasing teamwork, as the maneuver requires a high degree of precision and communication.

Historical and Modern-Day Operational Use of Elephant Walks in Practice

One historical use of elephant walks that did not go well would involve B-52 use during the Vietnam War. During early operations the B-52s would be bunched in what proved to be too close a formation and sent along predictable flight paths over northern Vietnam. This was done because of fear of possible electronic warfare, like radar exposure, but left the B-52s far too vulnerable from surface-to-air attacks from the North Vietnamese. After brief use this tactic was discontinued and flight paths were spaced out and made more variable.

More recently F-22s have taken part in several elephant walks in the last several years. They have usually been in sortie with other aircraft and the mix of aircraft allows for differing capabilities during operations. For example, to extend range or present different radar profiles. This tactic is used to escort Russian aircraft during boundary flights and lessons the reliance of the F-22 on multiple fuel tankers on what can be often unpredictable routes. 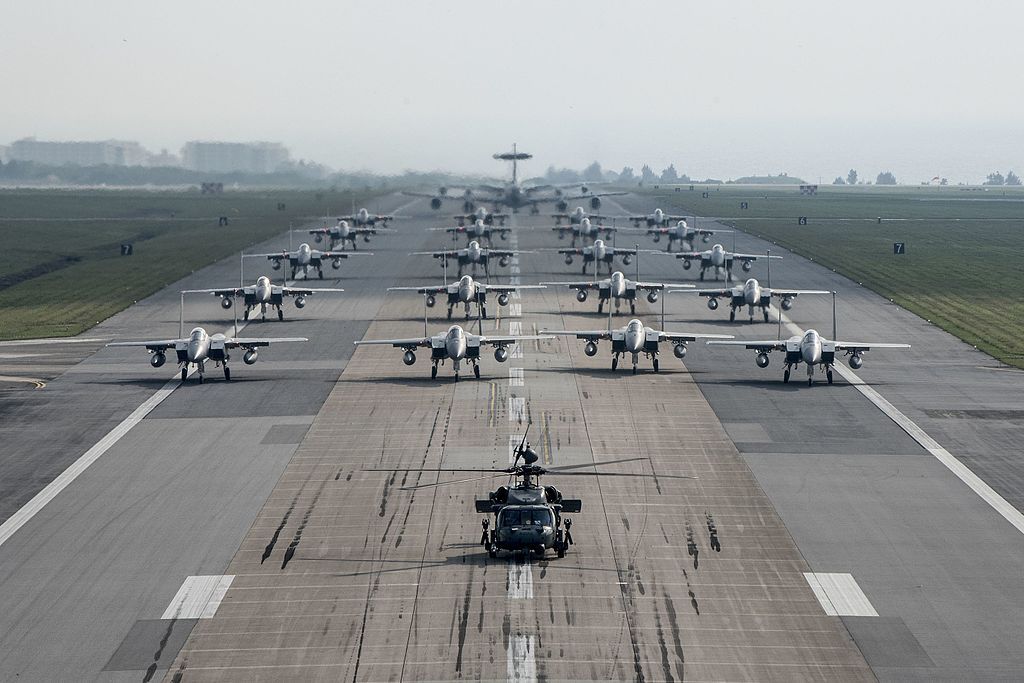 So next time a group of aircraft, bunched together tight in formation, begin taxiing down the runway before returning and taking off one by one in sequence, remember the term elephant walk and how its use has evolved over the years yet continues today.