Line crossings are events that for the US Navy and many other institutions usually have special meanings, and generally establish rituals when these lines are first crossed. Sailors who cross the line from Ecuador for the first time are given the nickname of Navy Shellback or just Shellback, they are also called Trusty Shellbacks, Sons of Neptune and Honorable Shellbacks

There is also the custom of nicknaming the sailors that have not yet crossed the Equator, these are called Pollywogs or also Slimy Pollywogs,

History of the Navy Shellback

Since the nineteenth century it was established as a custom in the sailors to perform ceremonies when they crossed the line of Ecuador and on board were sailors who made this crossing for the first time, these ceremonies became barbaric acts, where the sailors who were baptized received beatings that became cruel, coming to be beaten with wet ropes, with boards and often were thrown into the sea and dragged from the stern of the boat by the waves, sometimes coming to lose their lives in this ceremony.

This type of ceremony had a sudden increase during the Second War in the US Navy, due to the frequent passage that they had to carry out during the operations in the Pacific, due to the conflict with Japanese forces, in these times this ceremony involved acts like the so-called Devil's Tongue, composed of a metal instrument that was electrified and was nailed to the sides of the so-called pollywogs.

The subhuman events continued with strong beatings, and even wet hoses were used, to the point that according to Navy records, many sailors were taken to the infirmary after crossing the Equator. 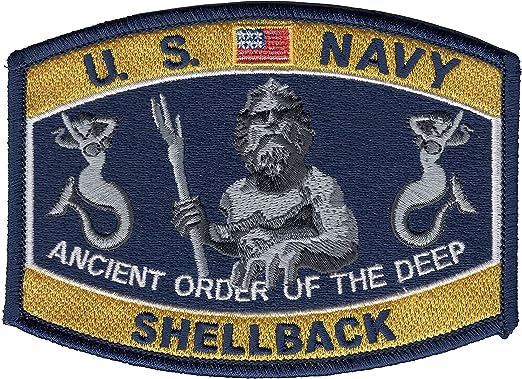 It is in the decade of the 80s when the violence of this ceremony is minimized by orders from superiors, motivated by deaths that occurred during the same, these deaths were a consequence of the abuses committed against the pollywogs.

The ceremony has its origin in medieval traditions where it was considered that in order to cross from one hemisphere to another, the approval of the King of the Neptune Seas was required.

This is the reason why the ceremony is presided over by a ship's officer who acts as King Neptune and has his court composed of Navy Shellback already consecrated, the night before the crossing of the line activities are held on board, where with jocularity a paradox is made of capturing prisoners who are taken to trial the next day, before a court presided over by King Neptune.

The Pollywog must go through an initiation ritual, which they must endure in order to finally be named as a Shellback. After this ceremony, where the Pollywog have been subjected to many jokes, they are given a certificate accrediting them as a Shellback.

Facts about the Navy Shellback