A Blue Nose Navy is a sailor who has crossed the Arctic Circle, above latitude 66 grades 34 minutes N, also has crossed the equator, there is a ceremony for the crossing of the line of the US Military, and once the crossing is completed, congratulations, and is a Bluenose with certification.

Withstanding climates of -40 degrees F, it's not easy, the things and situations that play against the average US Navy sailors seeking their Bluenose certification. What do sailors do to get this Blue nose Navy certification?

There is very little chance that a West Coast boat is far enough from the Bering Strait for its sailors to qualify for Blue Nose, if a sailor wants that certificate, he should focus on getting a boat in Virginia or Connecticut.

These criteria are unfortunately beyond the control of sailors, a sailor who wants to achieve this certification needs a Captain who has in his plans to go off course to pass through the Arctic Circle, these Captains always manage to go smartly enough to get the certificate, the increase that the crew manages to get in their morale is worth the extra fuel that is spent.

For a US Military, getting certified as a Blue Nose Navy is a true homage, for being able to operate above the Arctic Circle, and the sailors who are able to obtain that certification becomes a proud brotherhood.

Symbols such as coins and T-shirts are created, and in the past, they received written distinctions in the form of diplomas. 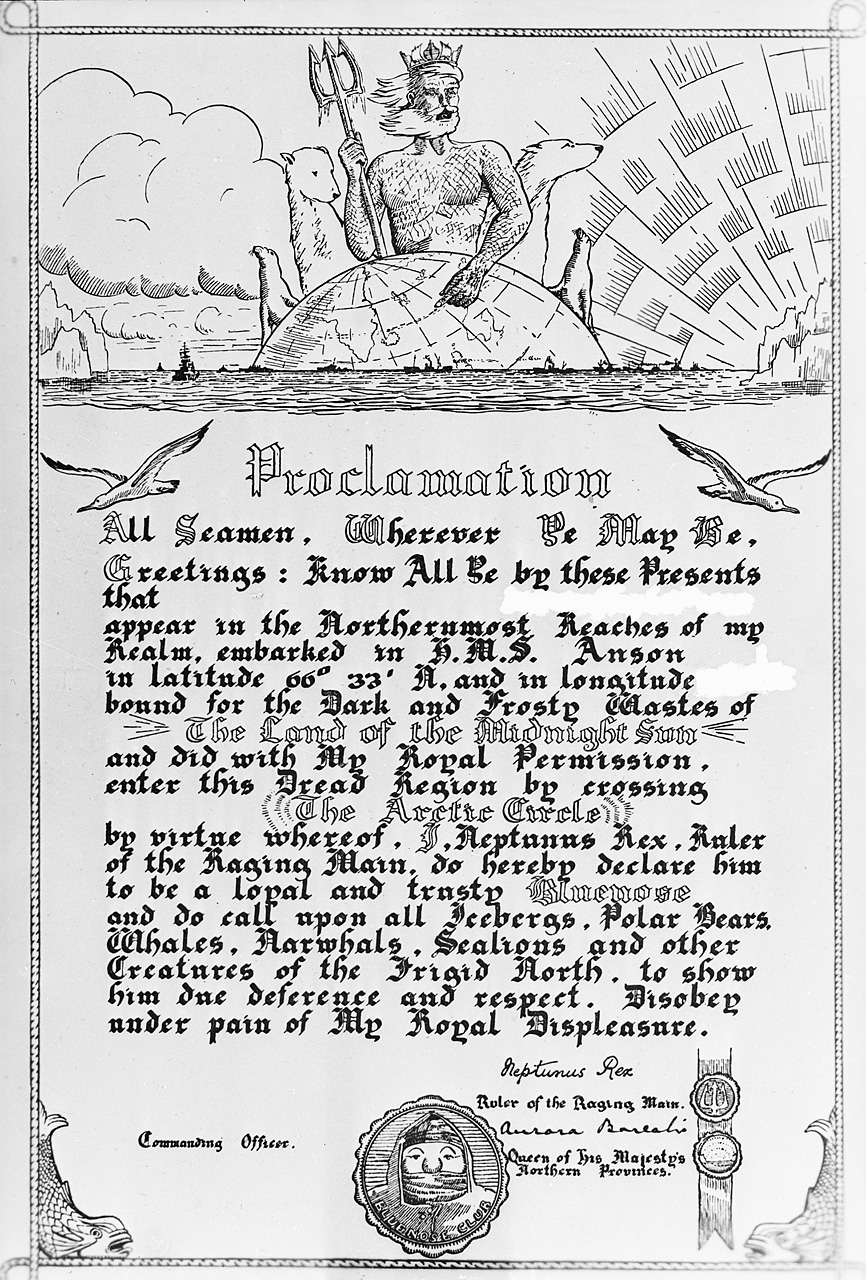 Like the one shown in this image, it was a certificate of the Order of the Blue Nose, which was granted to sailors when they marked their first crossing through the Arctic Circle. These certificates had no official status and their design was exclusive to individual ships.

The image shown was made to be distributed among the crew of the battleship HMS Anson in 1940, with a crew of about one thousand four hundred men.

The Blue Nose ceremonies, also called the Northern Domain of the Polar Bear, have become century-old traditions, performed by sailors and other seafaring crews, are accompanied by rituals and pomp, the crew members who have joined before are called Hot Bodies.

These Hot Bodies undergo a variety of initiation tests by the Blue Nose, and once they have undergone all initiation, they are accepted as Blue Nose.

These ceremonies are part of the naval tradition, and they increase the morale and the union of the crew, it forebodes the sailors of cold body, those that demonstrate to have the dignity to support the cold of the Arctic winds and the icy ice when they cross the Arctic Circle.

Navy Blue Nose is a ceremony when an individual becomes an officer or chief petty officer in the United States Navy. The term "blue nose" is believed to have originated during World War II because the paint used to create the blue markings on the sailors' noses would often rub off on their hands, creating a blue tint. The ceremony dates back to at least 1797, though it was not until 1946 that it became formalized within Navy regulations. It usually takes place onboard ship and includes a series of steps overseen by an officiating officer.

The first step of the ceremony involves three officers who raise their swords and salute, then turn towards the new sailor bearing his sword in one hand with his palm open upwards toward them and his other hand holding onto his hat with four fingers on each side of its brim. All three officers then simultaneously punch him twice in both upper arms as hard as possible without cutting through muscle tissue, which symbolizes that he will now be expected to resist pain and incurable sickness just like they do every day for their country's sake. Next, one of the officers places a flat object such as a book across the new sailor's shoulders while another taps him sharply twice on each shoulder blade with either side of her sword's blade.