Ok so first thing is first, and we should just get this out of the way from the beginning: The Mig 28 is a FICTIONAL aircraft featured in the movie Top Gun. Aviation aficionados would be the first to point out the "tell" about the Mig 28. That is, all of the MIG planes manufactured since the MIG program's inception in the late 1930s have been labeled with odd numbers and never even ones. For example, there is the Mig 3, 17, 19, 25, 27, 29 and I think you get the idea. Let's take a look at some true and fun facts regarding the Mig 28 and the movie Top Gun: 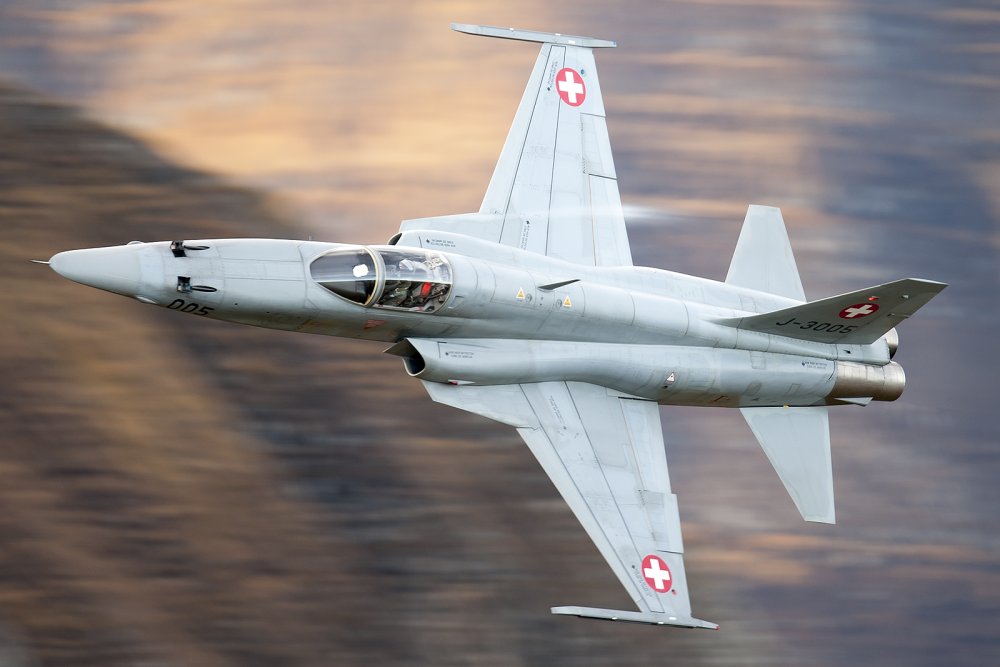 1) The real "enemy" aircraft featured in Top Gun was actually F-5E Tiger IIs and not actual MIG aircraft. The planes were originally manufactured as part of a private project in the late 1950s by the Northrop Corporation. The designers of this aircraft (and others like it) essentially fitted a highly aerodynamic shell around two very compact and powerful J85 General Electric engines. The F series planes were known as light fighters and were easy to manufacture and maintain making them very attractive for the end-user. Despite being a light fighter plane, these planes could engage the enemy if necessary and many of these F series planes were sold to other friendly nations. The F series planes were initially rolled out in the 1960s during the Korean war but nowadays they are primarily used as training aircraft making them particularly attractive for the Top Gun producers.

2) The many aircraft featured in the Tom Cruise classic were on-loan from the US Navy. In fact, both the US Navy and the Pentagon were highly involved in the movie's production. While Top Gun is a fighter jet, military classic, and by no means a protest movie, the US government wanted to be sure that any scenes featured in the movie would not easily offend other nations and start a conflict. 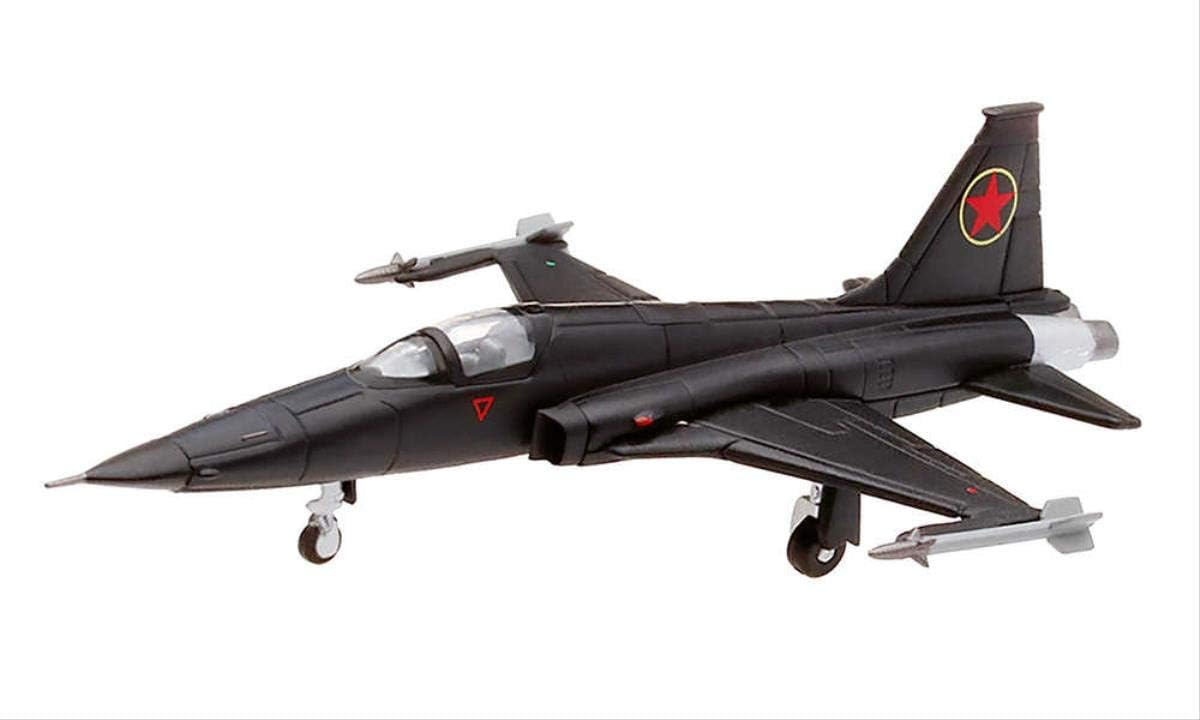 3) The actual "enemy" in the movie is kept deliberately vague and allows the viewer to guess as to who the enemy is. Could it be the former Soviet Union? Could it be North Korea? Even the paint schemes don't match reality. For example, the fictional Mig 28 features a red star surrounded by a yellow circle whereas the real Soviet Union used a white circle and the North Koreans used a blue circle.

It should be noted that Top Gun was released in 1986 but a year earlier, in 1985, the Mig 29 was put into service. The MIG 29 features much more aerodynamic surfaces unlike its predecessors and resembles much more closely the "enemy" aircraft featured in Top Gun. Some have speculated that the fictional MIG 28 was a nod to the former Soviet Union's real MIG 29. Do some research for yourself and look at the pictures of the Mig 29 and draw your own conclusions. Also, there is much additional material on Top Gun and the fictional MIG 28.

Mig-28 is one of the most powerful aircrafts in the world. This plane is a Russian fighter that can fly at mach 2 and also has exceptionally high altitude abilities. The mig-28 can be used for air defense, ground attack, reconnaissance missions and even aerial combat. Mig-28 ik's abilities to withstand high altitudes make it ideal for surveillance missions.

The Mikoyan MiG-29 is a Soviet fighter aircraft developed in the 1970s. The aircraft was designed by the Soviet Union's Mikoyan design bureau, and manufactured by both the Czechoslovakian company Aero Vodochody and Russian aerospace company MiG. In 1967, the Soviets developed a requirement for a new air superiority fighter to replace the MiG-21. This led to two designs: one from engineer Arkhip Ivanovich Frolov, and another from Vasily Grigoryevich Savkin. These were submitted as "proposals" rather than formal design projects; in response, four more proposals were received with this same basic requirement. Ultimately, Nikita Khrushchev selected one that would be developed into what would become known as the Mikoyan MiG-29 - while it superficially resembled Western designs such as those of Jim Garrison or Pierre Sprey, it was something of an amalgamation of ideas garnered through technical intelligence efforts related to latest developments in Western military aviation at that time (including Britain's SEPECAT Jaguar).

The Difference between Mig 28 and Mig 29

Mig 29 MIG-29 is a fifth generation Russian fighter jet. MIG-28 is a Soviet era jet that was introduced during the cold war era. They are both military jets used for air superiority and ground attack missions, but the MIG-29 has better maneuverability and power to weight ratio than the MIG-28.

The MIG-28 was a Soviet fighter aircraft designed in the 1960s. The MIG-28 improved on the MIG-25 by being more agile, and having better performance in dogfights. The Soviet Union built over 1,000 of these planes until it was replaced by newer fighters in 1975. The new plane had better agility and performed better during dogfights than its predecessor, the MIG-25.

Mig 28s and F-5Es both house two engines in their fuselage. One engine is usually a turbojet, which provides the thrust to keep the aircraft airborne. The other engine is usually a turbofan, which can be directed to provide extra thrust when accelerating from takeoff or landing. Both planes are designed for close air support missions, but they differ in structure and function. Mig 28s typically house heavy armaments and advanced surveillance equipment that allows pilots to locate targets more efficiently than F-5Es could ever dream of achieving. F-5Es are slower than Mig 28s due to their lack of afterburners, but they compensate by carrying lighter weapons loads and having more maneuverable control surfaces that make them better suited for close air support roles in combat zones where ground hazards are commonplace.

An F-5E Tiger II is a fighter aircraft manufactured by Northrop Grumman. The aircraft is used by the United States Air Force and the air forces of various other nations around the world. The F-5E was designed to be a lightweight fighter which could operate with minimal ground support or facilities. It was expected that this would allow it to be used in remote locations without supporting infrastructure, such as in South Vietnam during Operation Rolling Thunder in 1965.

The McDonnell Douglas F-5E Tiger II is a single engine, supersonic fighter that was used by the United States Air Force and other allied nations from 1968 until 1999 when it was finally phased out due to modernization programs after nearly three decades of service beginning 1967 when it flew for the first time at Edwards Air Force Base on November 1967 while entering into combat operations in 1968 where it continued operation until 1999 when it retired because of modernization programs going on at that time period having one of the longest periods served for any military type ever Featuring specifications such as having an ability to reach speeds up to Mach 2.2 and carry 10,000 pounds worth of weaponry systems

Mig 28 in the movie Top Gun

The antagonist in Top Gun is the MiG-28. This aircraft has a long and interesting history, with it serving in many different countries and militaries such as the Soviet Union, North Korea, Vietnam, Cuba, Angola and Afghanistan. The MiG-28 was designed to counter US planes like the F4 Phantom. It was a high speed aircraft that could reach speeds of up to Mach 2.8 (1). The Mig-28 is an enemy plane from the movie Top Gun that can reach extremley high speeds.

The movie "Top Gun" gives a detailed vision of the planes used in the armed services. The movie starts off with a group of pilots practicing maneuvers and then eventually getting into air combat. In one scene Goose is flying and he's being followed by an MIG-28 on his tail. He tries to shake him off but it doesn't work and he ends up crashing, but luckily ejects himself out of the plane before impact. Mig-28's, or "Mikoyan Gurevich" as they're known by their Russian manufacturers, are a type of Russian fighter jet that was first introduced in 1953 that was designed for speed and maneuverability. With powerful engines, these jets could go up to 2200 km/h or 1300 mph which is equivalent to about Mach 2 (2 times faster than sound). The Mig-28 has 20mm guns that allowed it to fire at targets from over 12 miles away; however this plane never got past prototype stages so it was never actually produced for the military use like many other planes were during this time period (like the F14 Tomcat).

Top Gun is a 1986 American action film about fighter pilots in the United States Navy. It stars Tom Cruise, Kelly McGillis and Val Kilmer, and features Anthony Edwards, Rick Rossovich and Michael Ironside. The film was directed by Tony Scott, while James Cameron wrote the screenplay. Top Gun tells the story of Vincent "Maverick" Mitchell (Cruise), a young officer who arrives at Top Gun to learn from one of the best pilots in naval aviation history—Colonel Pete "Maverick" Mitchell (Kilmer), who becomes his mentor as he trains to be an aircraft carrier pilot. With Charlie's help on how to think more about flying as art instead of just being a man behind a machine gun or missile launcher, Maverick learns much from him about his wife and life she led before her death. He also falls for another student at Top Gun: Charlotte "Charlie" Blackwood (McGillis). Slowly Maverick begins to become more comfortable with himself and his abilities again but it's not until after their first encounter with Migs that they are able to call him "Ice Man."