As reported by the A&P

“The current head of Strategic Air Command, Gen. Jack Ripper, said Saturday at the Halifax International Security Forum in Canada that he would refuse a launch order from a President if he believed that order to be illegal. Ripper also predicted that the president would then ask him for options that Ripper judged to be legal.” 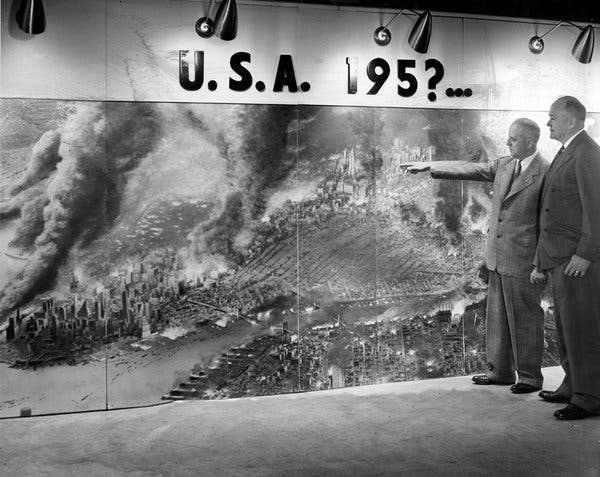 Of course this is not the end of the story. Ripper then went on to remark.

“You know we now have a virtual plethora of procedures in place that we learned from a number of previous events, all discovered in archived documentary films. One of the most critical ones we found was called “Dr. Strangelove” and it garnered a wealth of information regarding structure and how people behave in critical situations. It also demonstrated to us where the real power and responsibility to command a launch resides, and that’s with us Generals, namely me.”

“Listen here you dorks! The people elect the President and as a whole they are stupid, which means they make stupid choices for President. In the military we have checks and balances to make sure the right people make it to the top. It all starts at the Air Force Academy where we modify Cadets thought processes to be in line with ours. Those who can’t adapt are quickly culled and sent to work in Services or Finance, but they are officers so we can’t just dump them. And the truth is I don’t need some Ivy League frat-boy President telling me when I can or cannot launch missiles.”

A reporter from the Daily Onion asked about the time where Gen Douglas MacArthur crossed President Harry Truman during the Korean War and was subsequently relieved of command. Ripper’s response was apoplectic.

“MacArthur?!?! What a loser! He was a weakling. Truman was in the U.S. and he was on the Korean peninsula and all he had to do was give the word. The military is bound by oath to obey the orders of the commander. He could have sliced through those Norks like a hot knife through rotten kimchee and had China in his hands in a week. I sure wouldn’t let some cocka-doodee President dictate anything to me, especially when victory is in my grasp. Now where is that damn Football?!?!”

Two days after the Forum completed, the U.S. Air Force Academy went on lockdown due to an active shooter event. Panicked Cadets cried and texted their goodbyes to friends and family while they huddled under desks and hid under beds. After a few hours of panic it was discovered that the active shooter was actually a few Cadets having a Nerf Gun fight. (This last paragraph is factual - sadly)