“ I’m Mr. Meeseeks look at me!” Whether it’s killing your enemies or helping you perfect your gold swing the character Mr. Meeseeks is one to accomplish their job. The Meeseeks appear in the fifth episode of the first season of the critically acclaimed television series  Rick and Morty., "Meeseeks and Destroy".

Quickly rising up be one of the fans favorite side characters ( species? Artificial creation?) whatever he is Mr. Meeseeks exploded both literally and figuratively with popularity. Toys, games, posters, and even more cameos in the show have made Rick and Morty synonymous with Mr, Meeseeks. But what is it that made this character so revered in the shows history?

Much like the iconic Rick moment, there are often one or two episodes in each season that stand out. In season on “Meeseeks and Destroy” Is that episode. There is some reason that the audience connects with the Meeseeks. Aside from their humor and upbeat personalities, there is a darker and more relatable side to these fun-loving taskmasters.

Mr. Meeseeks like most of the characters in Rick and Morty is more than just two-dimensional. The concept of being created to accomplish any one whim that someone wants at a mear push of a button presents a moral dilemma that most Sci fy Tv shows ( especially animated ones) would just skip over, but not Rick and Morty. Mr. Meeseeks is all to aware of his condition and purpose and the futility of the struggle against it all. At one point in the episode, a Meeseeks is quoted as saying “ existence is pain” this was good for a quick laugh but it shows the deeper phycology of the character that as a viewer we are able to connect with.

The daily 9-5, I bet at some point we have all felt like a Meeseeks someone who is forced to wear a face of optimism because it’s the only way to face the day when we are being forced to do something we hate. This presents a bleak relatable point to the character. He is born to suffer and to some degree so are all of us.

This is normally a hard subject to confront, but since it’s done in a way that makes us laugh it’s more digestible. It’s only registered that we relate to this character we want to go home and finish our job and when we can’t achieve a goal what worth do we have? Despite being so otherworldly Mr. Meeseeks is one of the most human characters in the show. When compared to literal gods of the world of science, terminator snakes, hive mind planets, and a million ants that make up a person it is refreshing to see a character who is disposable and he knows it. 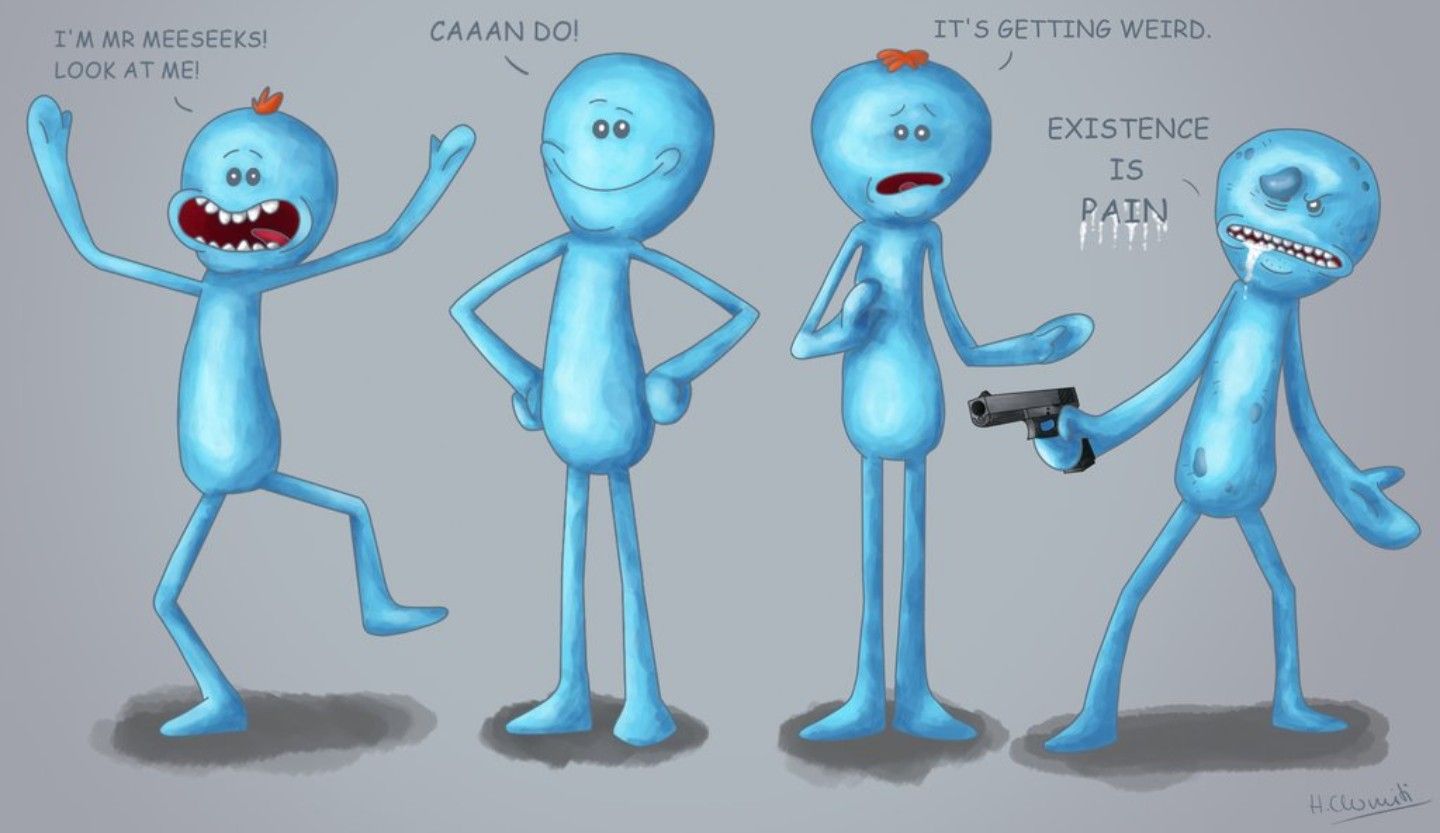 In conclusion, Rick and Morty is the perfect combination of sy fi, comedy, and dark realism to satisfy every part of our brain. You don’t have to worry about any one part overpowering another. In no other character is this seen as clearly as it is with Mr. Meeseeks.