Students of military history might not be able to agree where the use of military challenge coins first began, but they are typically unanimous in that each coin tells a unique story. Some coins will tell the story of a famed unit while others mark participation in various campaigns throughout modern history. The story of challenge coins themselves involves rumors of ancient Roman origins from thousands of years ago all the way up to a bar in Vietnam. Nestled in between rests the lore of a downed World War 1 pilot whose challenge coin with unit identification spared him an untimely execution. For the full history of the challenge coin you can read Everything You Ever Wanted to Know About Military Challenge Coins {hyperlink to other article}. However, if you are looking to dive deep into the unique story challenge coins tell about each branch of the US Military then you’ll find everything you need below. Yes, we even included the Coast Guard because someone has to.

To kick things off let’s start with the nation’s newest military branch that is perhaps only just slightly older than the challenge coin tradition itself. Founded in 1947, the United States Air Force was formed in the aftermath of World War 2. Having missed out on the glory of global victory in name only, the Air Force was staffed with veterans from the other branches as they began to write their own story. 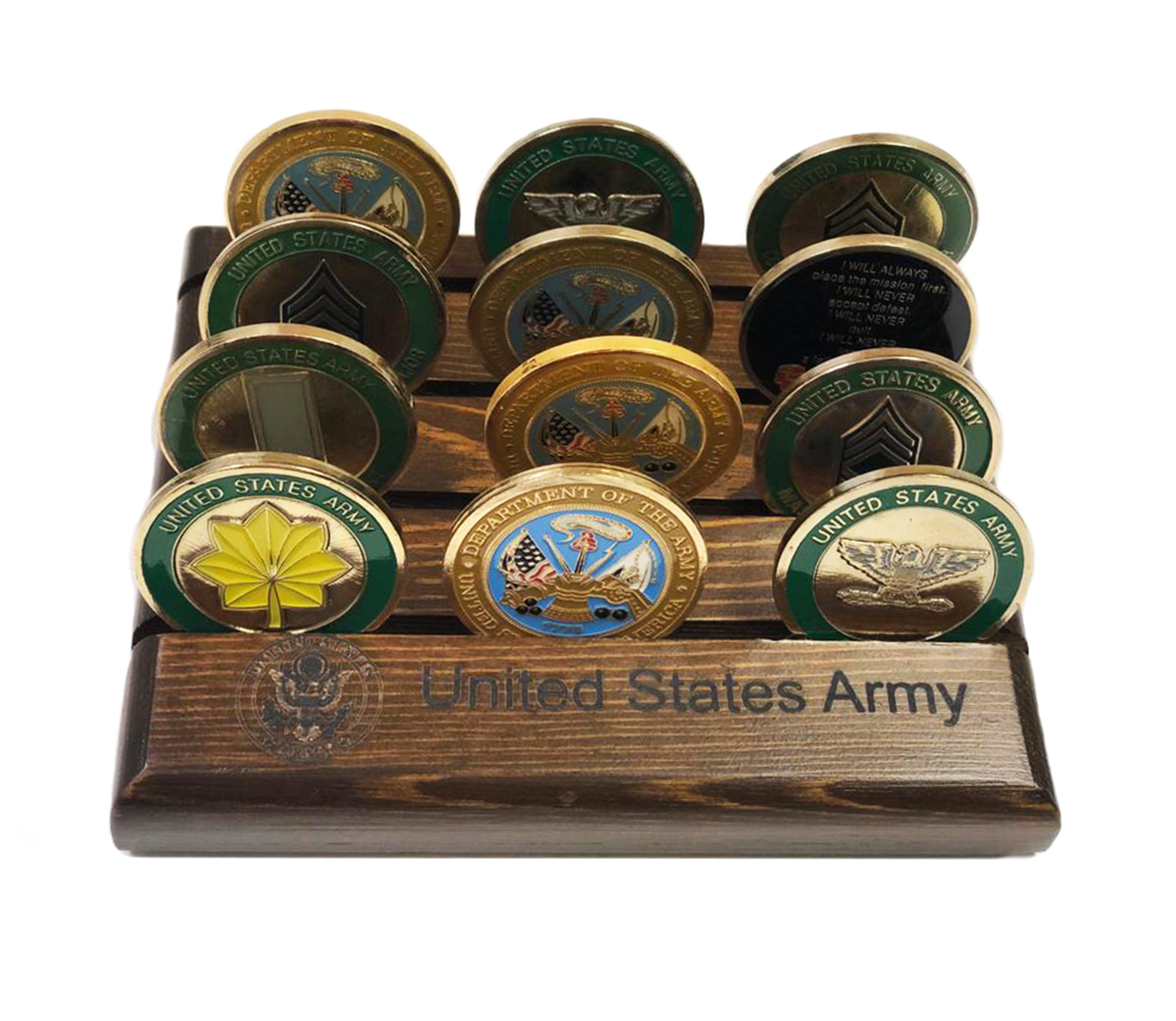 The Air Force begins to welcome their Airmen into the world of coins early presenting each graduate from Basic Training with the Airman’s coin. Designed to mark the transition from trainee to Airman, this coin signifies an official joining of the ranks. Likewise, when newly minted officers graduate from the United States Air Force Academy they are presented with a unique coin marking the begin of their journey as a commissioned officer. {EDITORS NOTE: I’m assuming all that is true because I read it, but since you are AF you might can add some nuance or correction if needed}

Air Force personnel then begin to acquire coins after joining various units throughout their career. Squadron coins are some of the most popular and they can even be customized to mark a unit’s particular deployment to a combat zone. For many, these coins mark a sense of belonging and identity to a unit. When a career in the Air Force comes to end it is easy for the new veteran to have a story in coin of unique military history.

The largest, oldest and most diverse military branch, the Army was founded back at this nation’s beginnings in 1775. While it is unlikely George Washington himself was handing out coins at Valley Forge, the military challenge coin tradition has taken ahold quite fine. Due to its sheer size, the Army perhaps has the largest variation of standard unit coins simply due to the number of individual units. With nearly 20 total Divisions, depending on what year you look at it, the subsequent number of Brigades, Battalions, Companies and Platoons all have the ability to mark their unique identity with a coin.

Like all the branches, this includes the ability to step back into history and mark participation in previous wars. While the challenge coin didn’t seem to be a tradition in the 1950’s, even veterans of the Korean War are able to mark their unit identification and participation with a coin if they choose. Special coins marking time spent as a POW or simply commemorating those missing in action are equally available.

However, each coin is a story that is not limited to that of an individual's unit. Coins can be given out to mark individual acts of merit or gallantry. In addition, often time coins are given out to show close cooperation between two units as coins are traded and collected. It supposedly hypothetically possible to walk away from a career of service having collected each unique coin, but if that service is the Army you might want to bring a truck to carry them all home.

The United States Marine Corps was founded on November 10th, 1775 at Tun Tavern in Pennsylvania. Often considered to be the most elite of the 5 general branches, if you don’t believe that just ask any Marine and they will gladly tell you. The Marine Corps got its origins sailing on US Naval ships and serving as the fighting arm of the Navy. While Marines are a department of the Navy, that’s a fact they will not gladly tell you.

The Marine Corps prioritizes the celebration of its unique history. While the Marines have been involved in every conflict since this nation’s founding it was the Pacific Theatre in World War 2 that truly set them apart. From the jungles of Guadalcanal to the volcanic ash of Iwo Jima, the legacy the Marine Corps built in World War 2 permeates the culture of the Corps today. On more than one occasion, challenge coins will even portray the classic raising of the flag on Mt. Suribachi on Iwo Jima.

The smallest of all the branches, the Marines maintain three active Divisions with a 4th Division in reserve. While each Division has its own coin you can find unique offerings down to the battalion and company level. Many Marines often reserve their primary identification at the Battalion level such as 2nd Battalion 8th Marines or 3rd Battalion 23rd Marines. Coins often follow suit, but you can still expect a wide array of variations.  ' 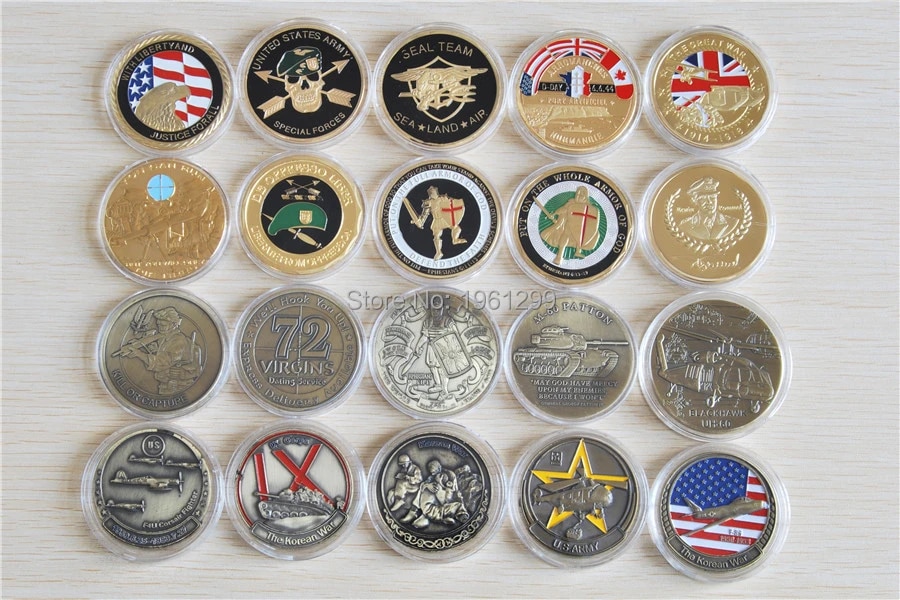 The United States Navy was founded just before the Marine Corps in 1775 with the audacious task of taking on the might of the British Royal Navy. While it survived those early encounters, it would go on into modernity to become the world’s largest and most powerful fleet. What is unique to the Navy is that it has the ability to mark a sailor’s participation by individual ship and not just unit.

Consequently, one can find coins for every ship in the fleet from the large Aircraft Carriers like the USS Ronald Reagan down to the small craft that ferry Marines such as the USS Peleliu. With a large Naval Aviation component, the US Navy challenge coins also features those who have taken to the skies. Naval aviation has played a key role in every conflict since World War 2 as it projects power into areas where bases are unavailable. The challenge coins will mark participation in various air campaigns even though the pilot never set foot on foreign soil.

Then, let’s not forget about the famed Navy SEALs. Perhaps one of the most celebrated special operations units on the planet, they too have their own coin. Although, it would be highly recommended you don’t throw one down at a bar unless you’ve earned the Trident yourself. For whatever occasion and in every clime and place, the US Navy’s story goes hand in hand with that of this nation. The challenge coins simply play their part in telling this unique story.

Within military culture there exist some good natured ribbing between branches, units and military occupational specialties. While the United States Coast Guard has been protecting this nation since their founding 1790 they are often the brunt of these jokes. Referred to as the “Puddle Navy”, the Coast Guard lacks the same combat elements as the other branches. However, the Coast Guard earns its stripes every year keeping the shores safe from would be evil doers.

In addition, the Coast Guard serves a vital maritime safety function as it rescues those who would be claimed by the sea from the cold waters of Alaska down to sunny Miami beaches. Coast Guard challenge coins will uniquely convey this role as members of various rescue units highlight their life saving mission over combat. Coast Guard units have and do deploy to various combat zones. However, the majority of their action comes right here in America. The Coast Guard often is left out of the discussion when it comes to major military service. While they are the topic of tease and ridicule from time to time, no one complains when they pluck you and your family out of a pickle during a major national disaster.

A Story for all of Military History

So there you have it. A brief description of each branch of the military along with unique factors in each branch’s challenge coins. While it would be great to highlight every coin available, there simply is not enough room in this article to even get started. Moreover, the use of challenge coins are not limited to military branches as government agencies, civilian employees and even Presidents of the United States have joined in on the action. You can check out just how deep this rabbit hole goes by searching the wide selection of challenge coins at {insert proper web link}