The CH-53 Sea Stallion, or the Sikorsky S-65, belongs to a family of heavy-lift transportation helicopters designed and manufactured by Sikorsky Aircraft. They were originally produced for use by the United States Marine Corps, but it is also currently doing business with Germany, Iran, Israel and Mexico. 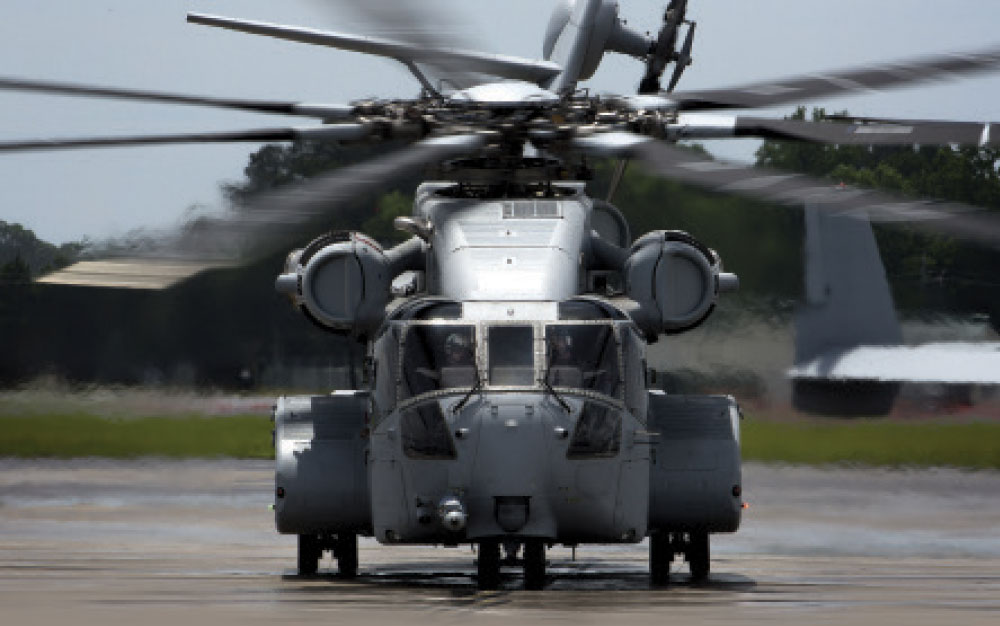 The CH-53 consists of a fuselage that is designed in a similar way to the Sikorsky S-61R, but the only dissimilarity between them is in terms of size since the Sea Stallion is much larger. There is a passenger door on the right side of the fuselage located behind the cockpit and a power-operated rear loading ramp. The fuselage is constructed in a manner to be watertight, however not intended for amphibious use, and is only employed during a state of inevitable emergency landings on water bodies. There are independent hydraulic systems installed inside it to ensure the smooth operating of the Stallion's mechanical flight controls. The CH-53A has a total carrying capacity of a crew of four; pilot, copilot, crew chief and an aerial observer, along with a supply of 38 troops, 24 litters with medical attendants, an internal cargo load of 8,000 pounds or an external load of 13,000 pounds on the single-point sling hook. There is a pair of 7.62x51mm NATO M60 machine guns installed on each side of the fuselage.

The design of the CH-53A constitutes of a six-blades primary rotor and four-bladed tail rotor constructed from the ones on the S-64 Skycrane. In order to leave more room on board for naval vessels, the tail of the Stallion was boomed and rotor were folded. In the beginning of its incipient days, the CH-53 was powered by twin General Electric T64-6 turboshaft engines providing 2,850 shaft horsepower each, each engine being located on the upper fuselage. In the later stages, the design included the T64-1 with 3,080 shp (2,300 kW) and the T64-16 with 3,485 shp (2,599 kW). The CH-53D model features uprated engines, initially T64-GE-412 with 3,695 shp (2,755 kW) then the T64-413 with 3,925 shp (2,927 kW) with an uprated transmission. Also, its interior was expanded to allow seats for 55 troops. In the coming years, CH-53Ds integrated an AN/ALE-39 dispenser for defensive countermeasures and an AN/ALQ-157 for ensuring infrared countermeasure.

The CH-53 has been widely employed for operations in warzones and served in conflicting times during its service. One of its most significant hallmark was during the Vietnam War, where it was used to recover drowning aircrafts and rescuing and /or evacuating personnel. Both the CH-53D and CH-53A were utilized by the US armed forces, playing a crucial role at the end of the conflict, performing evacuations of personnel during Operation Frequent Wind. The CH-53 also played a major role under the command of the Air Force, United States Marine Corps and U.S. Navy in aiding the Operation Iraqi Freedom and Operation Enduring Freedom in Afghanistan.