A History of "They've got us surrounded again, the poor bastards"

Fans of the book "Band of Brothers" might recognize this quote, "They've got us surrounded - the poor bastards." The author, and WWII veteran, Stephen E. Ambrose, attributed it to an unnamed medic. Ambrose famously documented the Battle of the Bulge and the struggles of the 101st Airborne Division in his book. Few may recognize; however, the true origins of the quote do not come from the authors time as part of E Company's 596th regiment, but instead from a quote attributed to one of the 101st lesser-known saviors at the infamous battle, Col. Creighton S. Abrams. Often overlooked due to the fame of his superior, Gen. George S. Patton, Col. Abrams was leading a tank charge during the Battle of the Bulge when he is famously said to have uttered, "They've got us surrounded again, the poor bastards"

But the history of Col. Abrams goes much further than a famous quip, no matter how succinct and devastating it may be. 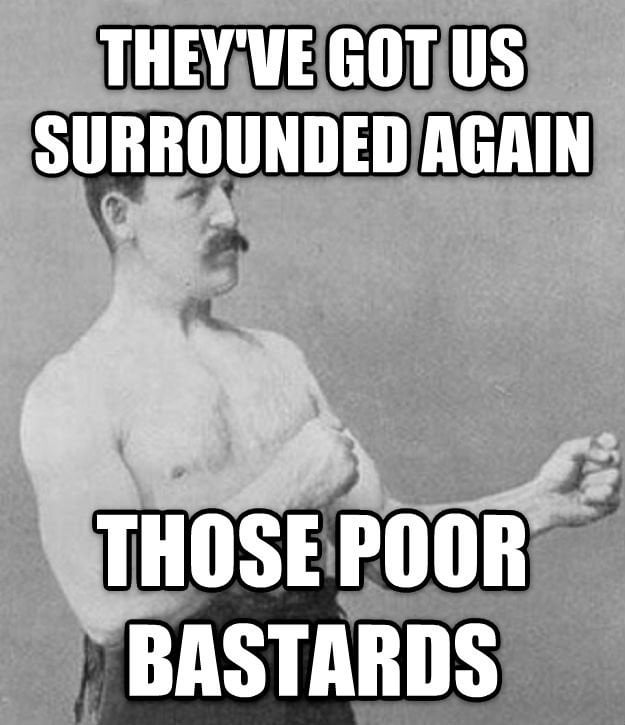 Few today have heard of Creighton S. Abrams, though Gen. Patton himself once remarked of Col. Abrams, "I'm supposed to be the best tank commander in the Army, but I have one peer: Abe Abrams. He's the world champion." In fact, it was while leading a strike that decisively broke German encampments around Bastogne that Col. Abrams is said to have fired his most famous missive. The setting of the Battle of the Bulge is part of the reason why the quote resonates. It is in the context of a hotly contested battle that proved trying for both sides that Col. Abrams made his remark, and his quote shows extreme confidence and leadership. Col. Abrams would go on to have a long and illustrious military career. He would go on to serve during the Korean War and tenured as Chief of Staff in West Germany from 1960-62. In 1964, Col. Abrams was promoted to become Gen. Abrams; he would go on to serve as overall military commander during the Vietnam War from 1968-72. He died in 1974 of lung cancer and is buried in Arlington cemetery.

But what about the quote in Ambrose's book? Well in that telling it is not a quote of daring and confidence, but one of gloom and despair. The "poor bastards" are not the German soldiers, due a butt-kicking as supposed by Col. Abrams, but instead wounded soldiers. The poor bastards remark is in response to a question as to why the injured soldiers hadn't been evacuated yet, because they were still surrounded. In this way, at least, one can say the spirit of the two quotes is the same.

Though a fearless leader and brilliant tactician, Gen. Abrams is largely unknown outside of the military world today. Despite nearly five decades of military service at the highest levels; and one of the most famous quotes from one of the most famous battles of all of World War II, Gen. Abrams is still largely overshadowed by Gen. Patton in the popular imagination. If one looks, though, traces of the Abrams legacy can be found, the M-1 Abrams tank is named in his honor after all. That is an honor an old tanker like Patton would surely be jealous of.